The IURA works to improve the economic, social, and physical characteristics of the low-to-moderate-income neighborhoods in the City and is responsible for the following activities: (1) administration of City's HUD Entitlement Grant; (2) issuance of loans for affordable housing and job-creating businesses; (3) sale of land for public/private-partnership urban renewal projects; (4) management of Cherry Street Industrial Park; and (5) development of grant applications.

COMBINED NOTICE OF FINDING OF NO SIGNIFICANT IMPACT,

INTENT TO REQUEST RELEASE OF FUNDS,

This notice shall satisfy the above-cited separate but related procedural notification requirements for activities to be undertaken by the City of Ithaca.

REQUEST FOR RELEASE OF FUNDS

On or about May 29, 2021, the City of Ithaca will submit a request to the U.S. Department of Housing and Urban Development (HUD) for the release of $199,900 in HOME funds under Title II of the Cranston-Gonzalez National Affordable Housing Act (NAHA) of 1990, in accordance with 288 (42 U.S.C. 12838), to authorize Ithaca Neighborhood Housing Services, Inc. (INHS) to undertake a project known as #3 of the City of Ithaca’s 2019 HUD Entitlement Annual Action Plan, Founders Way (previously known as Immaculate Conception School Redevelopment Project), for the purpose of creating 75 new residential units for low-to-moderate income families and individuals.  The project involves the adaptive reuse of a former school building and an existing single family residence along with new construction of two three-unit townhouses to create a total of 75 new residential units on a 1.695-acre site at 320 West Buffalo Street in the City of Ithaca, Tompkins County, with an estimated total project cost of $26,763,469.

FINDING OF NO SIGNIFICANT IMPACT

The City of Ithaca has determined that the project will have no significant impact on the human environment.  Therefore, an Environmental Impact Statement under the National Environmental Policy Act of 1969 (NEPA) is not required.  Additional project information is contained in the Environmental Review Record (ERR) via the links below:

Any individual, group, or agency may submit written comments on the ERR to the IURA by emailing amendizabal@cityofithaca.org .  All comments received by May 29, 2021 will be considered by the City of Ithaca prior to authorizing submission of a request for release of funds.  Comments should specify which Notice they are addressing.

The City of Ithaca certifies to HUD that JoAnn Cornish in her capacity as Director of Planning and Development consents to accept the jurisdiction of the Federal Courts if an action is brought to enforce responsibilities in relation to the environmental review process and that these responsibilities have been satisfied.  HUD’s approval of the certification satisfies its responsibilities under NEPA and the related laws and authorities and allows the City of Ithaca (and therefore, Ithaca Neighborhood Housing Services) to use Program funds.

OBJECTION TO RELEASE OF FUNDS

HUD will consider objections to its release of funds and the City of Ithaca’s certification for a period of 15 days following the anticipated submission date (May 29, 2021) or its actual receipt of the request (whichever is later) only if they are on one of the following bases:

Persons needing special accommodation to review the ERR should contact amendizabal@cityofithaca.org or (607) 274-6565 as soon as possible, at least 72 hours prior to the end of the comment period for assistance.

REQUEST FOR EXPRESSIONS OF INTEREST (RFEI)

The IURA is seeking conceptual proposals to redevelop underutilized public lands on Inlet Island.  An approximately 2.65-acre waterfront project site is available for potential acquisition and development.  The IURA seeks urban renewal projects that improve the physical, social and economic characteristics of the project site and surrounding area, and advance goals and objectives of PlanIthaca, the City’s comprehensive plan and its Waterfront Plan chapter adopted in 2019.  These plans encourage the following land use objectives: Mixed-use development; housing opportunities at all income levels; public access to the waterfront; better multi-modal connections; and vibrant waterfront.  The goal of the RFEI process is to identify if any respondent’s schematic plan and development program will gain conceptual approval from both the IURA and Common Council as the basis for a proposed urban renewal project to redevelop the project site.  A successful project may advance for further negotiation on proposed binding terms for property conveyance and a development program when more extensive pre-development expenses will be expected to be incurred.  The complete RFEI (including contact information) can be viewed via the link below.

The City of Ithaca’s adopted 2021 HUD Entitlement Program Action Plan and plan for CARES Act CDBG-CV-3 (COVID-19-specific) activities can be viewed below. A more detailed chart is also accessible using the following link:

The Community Development Block Grant (CDBG) and HOME Investment Partnerships (HOME) Entitlement Programs provide Federal financial assistance from the U.S. Department of Housing and Urban Development (HUD) to more than 1,100 localities and state governments. These flexible sources of funding offer local governments, with citizen participation, the opportunity to fund certain projects, programs, and public services that meet specified national objectives. The City of Ithaca became an Entitlement Community in 2004 and has since provided financial support to dozens of local projects that principally benefit low- and moderate-income (LMI) people by providing decent housing, suitable living environments, and/or expanded economic opportunities. The Ithaca Urban Renewal Agency (IURA) administers the City of Ithaca’s Entitlement Grant program, on behalf of the City. The IURA invited interested organizations, agencies, businesses, community groups, and individuals to submit applications for projects to be funded for the 2021 Program Year. A chart listing all the applications received can be viewed at the following link as well as schedule information:

The Ithaca Urban Renewal Agency (IURA) solicited proposals to redevelop the Green Street Parking Garage site for a project that increases housing choices and retains sufficient parking to meet current parking utilization, as well as additional parking demand created by the project. Other preferred uses include ground-level active uses on Green Street and a conference center. The IURA is authorized to negotiate the property sales price and the development program, subject to final City of Ithaca Common Council approval. The IURA seeks fair market value for the property, but expects deductions in consideration of community benefits provided by the project (e.g., below-market housing; reconstruction of public parking at developer’s expense).

The IURA Economic Development Committee (EDC) initially reviewed and discussed the applications at its August 21, 2018 meeting. On September 14, 2018, the Committee reviewed and numerically ranked the four applications, which formed the basis of its recommendation to the IURA Board.  The IURA Board reviewed and discussed the rankings at its September 27th, 2018 meeting (including a Public Hearing), and subsequently ranked the four applications on October 25, 2018 (see image of table further below), recommending the top two projects to Common Council for discussion: Vecino Group New York, LLC and Newman Development Group, LLC. A joint Common Council-IURA Board meeting was held on Tuesday, November 13, 2018 to discuss the project and the two top-ranked proposals. On December 13, 2018, the IURA Board met, reviewed additional documents from the applicants, listened to additional public comments, and unanimously adopted a resolution designating Vecino Group New York, LLC as the preferred developer and “qualified and eligible sponsor,” authorizing entry into an Exclusive Negotiation Agreement (ENA) period with the sponsor for the purpose of structuring a proposed Disposition and Development Agreement. The Disposition and Development Agreement shall be subject to approval by both the IURA Board and the Common Council: 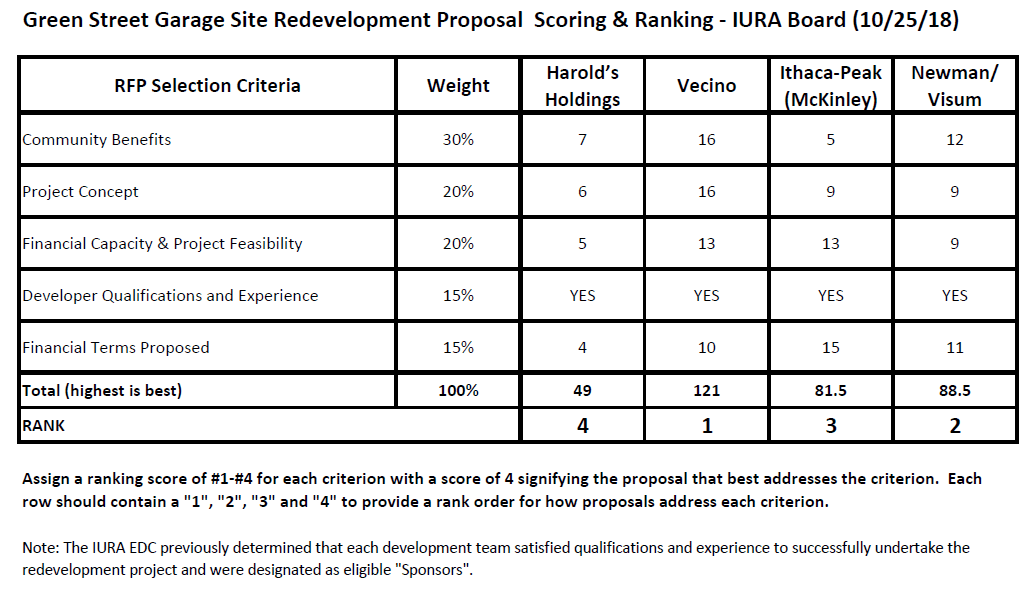 The AFH is an updated approach to looking at the fair housing landscape in order to set locally determined fair housing priorities and goals (e.g., are Ithaca residents able to achieve their housing goals; have Ithaca residents ever been treated unfairly in regard to housing; what could improve Ithaca residents' housing situations). The Assessment of Fair Housing is available for review via the following link: http://www.cityofithaca.org/DocumentCenter/View/6952. You can also view the Assessment of Fair Housing Goal Summary Table via the following link: http://www.cityofithaca.org/DocumentCenter/View/7134. Please contact the following person with any questions:

The U.S. Department of Housing and Urban Development's (HUD) Affirmatively Furthering Fair Housing (AFFH) rule requires cities and towns receiving HUD funding to examine their housing patterns for evidence of housing discrimination. To facilitate this process, HUD created the Affirmatively Furthering Fair Housing Data and Mapping Tool (AFFHT), a publicly accessible interactive web site for conducting the fair housing analyses required by AFFH. AFFHT is a public-facing application, so there are no user registration or access requirements. All users have the same basic permission to use the site. You can access the AFFHT by clicking on the following link:

Once you land on the AFFHT web site, you’ll see an introductory pop-up window, where you'll be asked to select the state and jurisdiction you’re looking for, and whether you want to view just that specific jurisdiction’s map, or a map of the entire region. You will then be taken to a subsequent screen where you'll be asked to select a type of map (e.g., "Race/Ethnicity," "Housing Choice Vouchers & Race/Ethnicity," "Demographics & Job Proximity, "Demographics & Environmental Health"). Once you find the type of map you're looking for, click on the "Go to Map" button located at the bottom-right of the application wizard. Depending on the type of map you select, you may then be asked to choose a specific data set for the map (e.g., "Race/Ethnicity Trends, 1990" or "Race/Ethnicity Trends, 2000"). For more detailed information about each map, including illustrated instructions on how to use the mapping tool, please refer to the Department of Housing and Urban Development (HUD) User Guide at the following link: https://www.hudexchange.info/resources/documents/AFFH-Data-and-Mapping-Tool-User-Guide.pdf.

You can also click on the following link to go to a page containing tools, guidance, training, data/mapping, and other resources related to the Affirmatively Furthering Fair Housing (AFFH) rule: https://www.hudexchange.info/programs/affh/resources/#tools-for-fair-housing-planning-under-the-affh-rule. 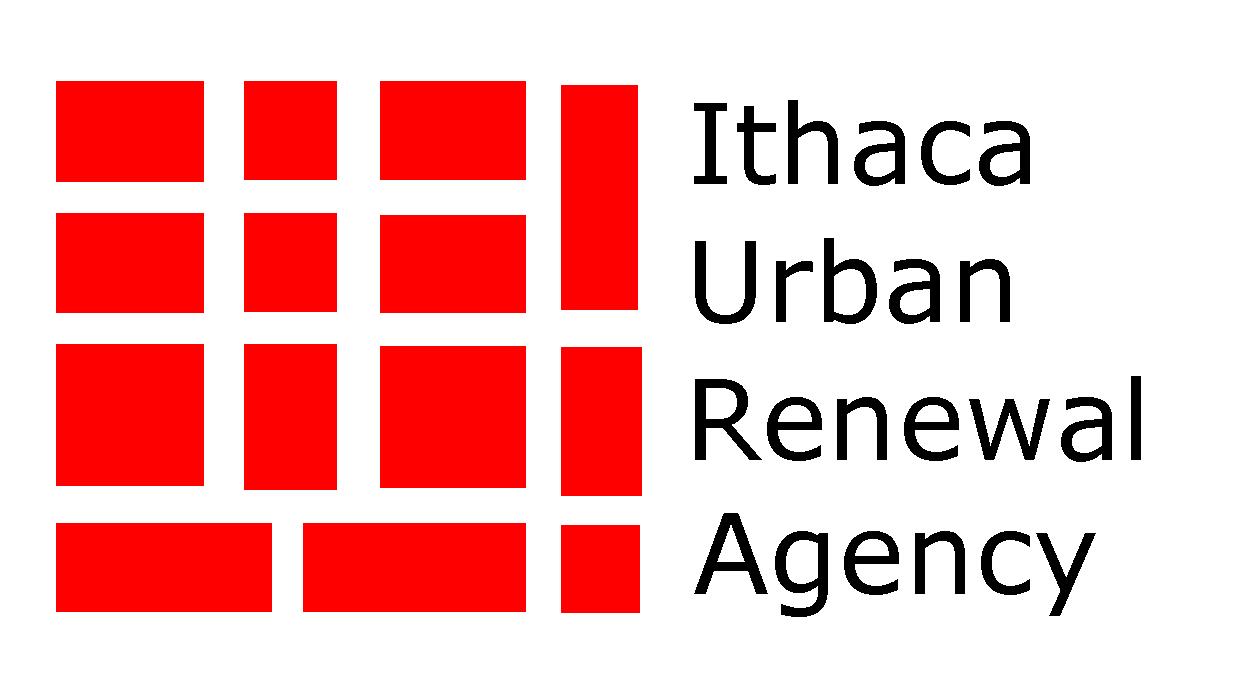